Countdown to Days of Awe #1

Teshuvah (repentance/return) begins with recognizing one's wrongs, and feeling sincere remorse. Saying or texting to people (or posting on FB) "If I have done anything to offend you this past year, please forgive me" doesn't cut it. You can't ask forgiveness if you don't know what you did wrong, or even IF you did something hurtful. Be specific in your requests for forgiveness. No one deserves a generic "form letter" apology, and it doesn't help you grow as a person either.


Yes, I know I wrote about this before, and it's worth reading again (or for the first time). It's important enough to me that it made it into my second book too.

My first blog post on TC Jewfolk is naturally about . . . writing. And vulnerability. And the impact on a writer's self-esteem. Here's how it starts:

I think I was born a writer. I was not, however, born with the thick skin that any successful writer needs. “You’re too sensitive,” my parents would tell me. But shouldn't I be? Isn't sensitivity to other people and one’s environment part of what makes one a good writer? 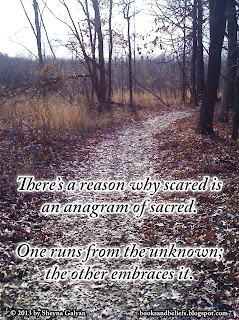 I took this photo a couple of years ago. The saying came to me a couple of nights ago. I think they were destined to be together. :-)

Sharing is absolutely allowed, but please do not crop off, delete, or otherwise obscure the copyright notice. Thanks for your cooperation!

Tomorrow is Valentine's Day here in the States. I don't celebrate it. Don't get me wrong—I like flowers and chocolate as much as anyone—but it is a holiday that, for kids, might as well be called Self-Esteem-Busting Day.

I'd like to say that I don't celebrate it because of its dark origins. I even tried to give it a different spin by calling it יום אהבה (Yom Ahavah), or Day of Love. No luck. Those little candy hearts rose up from my subconscious and left a sickly sweet taste in my memory.

The truth is that it was a big thing in my elementary school. Everyone in class was supposed to bring little Valentine's Day cards for every classmate. Candy was optional, but extremely valuable.


This meant a trip to the store to buy a box of cards, plus some candy, because giving out candy was a sure way to earn a few points on the social acceptability index. And then each card had to be handwritten with "To" and "From" names. Thirty-one kids. And a big one for the teacher. For much of my early elementary school career, this was an expense my family couldn't afford.

Then came the moment of truth: we had a time during class for handing out valentines. Everyone got up and moved around the classroom, distributing valentines as covertly as possible. Because even though the idea was that everyone would exchange valentines, that never actually happened. Many kids only brought valentines for their friends and the popular kids in class. (Hint: I wasn't one.) So, after distributing 31 cards, it was common for some of us to come back to our desks to find that we had maybe four cards from other classmates.

Valentine's Day had become a popularity contest. The kids who received all 31 were not shy about sharing this fact. Those of us who had fewer than ten were shamed into silence. And it didn't matter that we'd brought candy.

Fast forward some . . . well, a lot . . . of years. I'm an adult now. I don't have to give cheap cards to all my friends in the hopes that it will be reciprocated and I won't be branded a social pariah for the next week or so until the next popularity contest comes along. I don't have to try to buy my way into peer acceptance. But I still don't like Valentine's Day.

It's big business now. Tens of billions of dollars are spent on cards and gifts. For adults, it's no longer a popularity contest; it's now a love test. "If you give me chocolate/flowers/card/jewelry, then that means you love me. If you don't . . ."

How much heart-shaped jewelry does a woman need? And why, oh why, does it have to be on one arbitrary day a year?

Valentine's Day is too contrived. It seems like a setup to fail. "Only one rose, dear? But last year you gave me a dozen, and a diamond heart necklace." "What do you mean, you forgot Valentine's Day? Don't you love me?" "I have to figure out what to get my [significant other] for Valentine's Day, and my credit card is maxed out."

How about this? This is my answer to Valentine's Day. I don't celebrate it. I try not to even acknowledge it, except for the occasional blog rant. But what I do is make it a point to tell those I love that I love them. Every day. I tell them that appreciate them. I value their presence in my life. I try to do nice things for my husband just because.

Get blog posts delivered right to your inbox!

Get blog posts via email

If You're New to This Blog:

What I'm Blogging About

This work is licensed under a Creative Commons Attribution-NonCommercial-NoDerivs 3.0 Unported License.